The following article was published in cnsnews.com 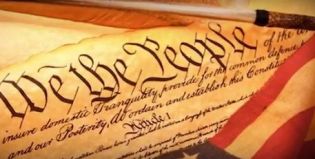 In September of 2017, the Annual Annenberg Constitution Day Civics Survey found that about 74 percent of the country could not name our three branches of government.  This year, the oblivious-count mildly dropped to 68 percent – we’re all so proud!

Of course, when you examine the constitutional disconnect exhibited by those populating our federal courts and Capitol Hill, it makes the above figures appear as if Annenberg was perhaps shaving some points.

I’m not talking about the over-hyped stumble of Democratic Socialist Alexandria Ocasio-Cortez in which she referred to our, “three chambers of Congress” and then cited “all three chambers of government: the presidency, the Senate, and the House.”  Too many folks from our full political spectrum have done far worse.

No, more unnerving than Ocasio-Cortez are those who, with stentorian certitude, insist that the actions taken by one branch or another are unlawful simply because they run afoul of what they themselves find acceptable.

Recently on NBC’s “Meet the Press,” incoming House Government Reform Committee Chair Elijah Cummings addressed the issue of President Trump possibly making a deal with Mexican President-elect Andrés Manuel López Obrador to keep thousands of caravan asylum-seekers in the north of his country to allow for a more orderly processing of their claims in the U.S.

Cummings argued that Trump couldn’t do that saying, “They should be allowed to come in, seek asylum, that’s the law.”  He was also pressed about whether the Trump maneuver was constitutional to which he responded, “I don’t know.”

If it’s constitutional, it’s legal.  If Cummings doesn’t know about the former, he can’t credibly decree that it’s not the latter.

Additionally, there’s existing legislative law that’s precisely on point in explaining the President’s authority to control those endeavoring to enter the U.S.  It’s in the form of the Immigration and Nationality Act of 1965 (U.S. Code › Title 8 › Chapter 12 › Subchapter II › Part II › § 1182 wherein it reads:

Even more bizarre (and touching on the ticklish but relevant question of when a president might reject a court decision based on a separation of powers claim), we have the recent ruling by Northern California U.S. District Judge Jon Tigar ordering Trump not to go forward with his proclamation to deny asylum applications for those entering illegally.

He wrote, “Whatever the scope of the President’s authority, he may not rewrite the immigration laws to impose a condition that Congress has expressly forbidden.”

This conclusion very much leaves open the option for Trump to disregard the lower court injunction as a separation of powers issue even as he challenges it up the appellate and Supreme Court ladder.  Why? These aren’t small groups of routine immigrants applying for asylum.  They’re an organized (and now border-busting) immense throng of thousands arriving all at once with flying flags belonging to the very governments from which they’re supposedly fleeing and are claiming to be their oppressors.

Denotatively or connotatively, that dynamic constitutes an “invasion.”

And given that the president takes a constitutional oath to “preserve, protect and defend the Constitution,” this will naturally include Article One, Section 9, Clause 2 in which it states that, “The Privilege of the Writ of Habeas Corpus shall not be suspended, UNLESS when in Cases of Rebellion or INVASION the public Safety may require it” (emphasis added).  Additionally, there’s Article IV mandating that “The United States shall guarantee to every state in this union a republican form of government, and shall protect each of them against invasion.”

It’s important to remember that the judiciary has no authority, or leverage, to deny another branch from checking an offending branch’s attempt to usurp its own Separated Powers.  This is especially the case when one of the two parties in dispute is the judiciary itself. After all, the most universal bedrock principle in law is that “no-one should be a judge in his own case.”

Thankfully, the highest ruling for such a conflict is with the Senate trial – assuming the House impeaches in objection to the Executive’s separation of powers claim.

The only reason why checks and balances exist is because each branch of government has certain absolute powers beyond the reach of the other two, and each possesses a different way to implement said check.

Lord Montesquieu made it abundantly clear that whenever you allow the Judiciary to overtake the Executive, oppression ensues, and his wisdom proved to be one of the cornerstones of our Constitution.

If not, we would have tyranny because any of the courts of the Judiciary could potentially rule in ways that would usurp the separated powers of the other two branches of government bit by bit all under the faux trappings of legal entitlement.

Another example of where the president would have a viable separation of powers claim against the Judiciary would be regarding the recent 9th Circuit Court of Appeals decision saying that Trump could not drop President Obama’s Executive Order (or Executive Memorandum) on DACA (Deferred Action for Childhood Arrivals) because he didn’t show its non-constitutionality.

However, even when said order is constitutional, every succeeding president has always had the ironclad right to jettison a preceding president’s Executive Order.

A court can legitimately bat down a president’s Executive Order on constitutional grounds; however, it can never force the continuance of that Executive Order upon a new administration.  By that measure, the Supreme Court ceases to be a co-equal branch of government and instead morphs into a tyrannical tree.

Nevertheless, because the president is most definitely not a king, his rejections of these rulings don’t end there. The House can vote on articles of impeachment and send them to the upper chamber for a Senate trial.

At that point, if Trump argues his separation of powers claim well enough by ensuring that the Senate can’t muster the two-thirds vote required to oust him, then his actions stand.